This is a story I wrote for my then 4 year old son. At that time my son was, through and through, a worker. He was interested in machines, and all the activities of what are sometimes called "The Professions"; things like the butcher, the baker, the candle stick maker. You can see where I dwelt on the specifics of how the sword was made.

As I was looking into how a sword is made, and whether a sword could be made from a meteorite, I stumbled on a video of the whole process, set to German  thrash metal music. For several days, after putting my son to bed, I would lay down to nurse the baby to sleep, and watch (using headphones!) that video to learn the whole process.

We have loved this story for many years now, and I hope others can find some use in it. Enjoy!

A Sword for Saint Michael.

Once upon a time, it may even be here and now, there was a man who went by the name "Smith". He worked the forge down at the smithy. On any ordinary day he made ordinary things like horse shoes and nails, forks and knives, and hooks to hang things up.

One one evening, after working at the forge all day, Smith was making his way home. He looked up at the deep night sky. It was as deep and dark as velvet and across the sky's face we're scattered hundreds on tiny silver stars.

As he watched, one of the stars shot across the sky and went behind a hill to the side of the road. Smith followed it with his eyes, and, wondering what he would find, he left the road and climbed up the hill through the trees, and brush, and bracken. There on the other side was a furrow in the earth, and in the furrow was a large lump of iron. The iron was glowing hot, too hot to touch, so the Smith decided to come see it again in the morning.

The next morning, Smith found the furrow and the iron, and this time it wasn't hot, so he picked up the heavy lump and brought it back to the smithy.

He didn't know quite what to do with it, so he placed it on the work table and went about finishing up his ordinary work. He finished some horse shoes and nails and a ladle for the cook. Then he turned back to the lump of iron and now he knew, he would make a sword.

First he used his tongs to pick up the iron and thrust it into the fire of the furnace. He used the bellows to blow the fire high and hot. Then he took the iron from the fire and placed it on the anvil. Using his hammer, he beat the iron well. He beat it long, and he beat it narrow, and he beat it thin. At one end he formed a point, and at the other he formed a cross shaped hilt and handle. It took him many days and when he was done forming the sword, he quenched it in oil to give it flexibility. He thrust the hot sword into the barrel of oil and the flames and Sparks shot up into the air.

Next Smith polished the sword. He used a stone wheel which he spun with a little peddle. He used grit to sharpen the edge of the sword, and he used grit to polish the sword until it shone.

When the sword was done, Smith took it to the carpenter. "Will you help me make a handle for this sword?" Asked Smith. "I will," said the carpenter. He found a beautiful piece of rosewood from which to make the handle. He shaped it so that it fit and used tiny little nails to hold it in place. Then he wrapped the handle in leather, so that it would be comfortable to hold.

Then Smith took the sword back to the smithy and laid it on the work table because he did not quite know who the sword was for. Then he went back to making ordinary things.

When evening came, the Smith began to tidy his shop for the night, when a stranger came to the smithy door. He was tall and he wore a red Cloak, and his face shone like the sun.

"I am Saint Michael." Said the stranger. "You have made a sword for me."

The Smith smiled and nodded. "Yes," he said, "I knew I made it for some special." He handed the sword to St. Michael, who bowed, and took it with him back to heaven.

In light of the coming total solar eclipse this Monday (August 21, 2017), I created a little finger game/poem to share with my own children.

They made a show that others could glance.

Beside them danced a loving spark. (Note: in some places Venus will be visible at the height of the eclipse.)

In the sky they made a shining crown.

and Moony (repeat with left hand.)

went out to dance. (Slowly, bring hands together so that finger tips just touch in front of sternum.)

They made a show that others could glance. (Look enquiringly, lovingly from left hand too right hand.)

Moony danced dark (raise left hand so that it eclipses right hand, and is between right hand and viewers.)

Beside them danced a loving spark. (Extend left thumb towards the left.)

They danced so high ( raise eclipse slowly, straight up.)

They danced so round ( slide hands to create a bowl, palms still facing towards you.)

In the sky they made a shining crown (keeping the heels of your hands together, continue sliding fingers open and apart so palms now face the viewer.)

Rest a moment and admire the shining crown above your head.

This month has been very hard. I am feeling responsible for every ugly thing my children do. I am feeling the ugliness inside myself as well and it seems unrelenting.

I was feeling especially discouraged when I thought about the goal of keeping the Light alive through the winter. We were at forest school and my 3yo was screaming and wailing because she was too cold. No wonder, since she refused to wear anything more than her pajamas and sandles. It was 45 degrees out and I decided to let her experience it her way. I brought along her hat, socks, vest, sweatshirt, woollen pants, mittens and boots, but no way was she going to wear them!

So we ended up leaving, and I was frustrated and disappointed. And I was trying to imagine the life of those who live in those temperatures. I was chastising myself for having our house an artificial, cushy 64 degrees, and giving her a false sense of the season. But I have our temperature set that 'high' because I still find myself wearing a sweatshirt all day and a hat in the evening. I wondered about myself: perhaps without that climate control I would just be one of those people who is grouchy and uncomfortable all winter long. Then I imagined that opening feeling of moving into the Light and warmth of the summer.

And I thought: why should it be easy? Isn't the reason we have winter festivals: light upon light from Michaelmas, to Martinmas, to Advent, to Christmas, to Epiphany, to St. Brigid's day, because it is hard to keep our inner Light alive?

This is my work as an adult to keep my flame alight through the coldness and darkness and ugliness. I love, love love all the pretty of lanterns, and spices, and evergreens, and presents, and candles and feasts, but those are all analogies. My Work is within me.

So I came home and turned down the thermostat. 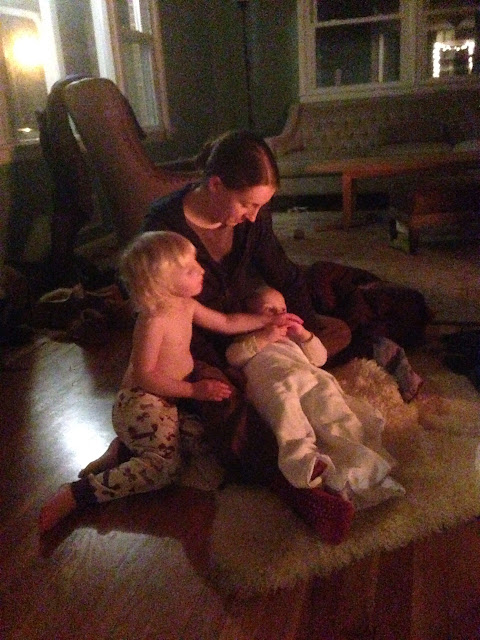 What would six months of no posts be without a baby at the end of them?
Welcome Baby M2. 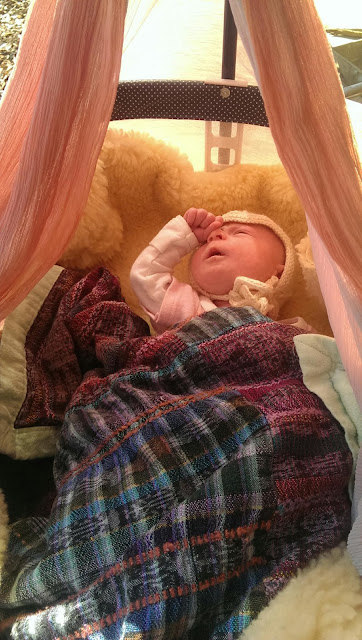 I got out of the shower today and B came to show me what he had been working on. He had made "a sun hat with a plume". I helped him find a peg person and tie the hat on, but I am so pleased he came up with the idea on his own! 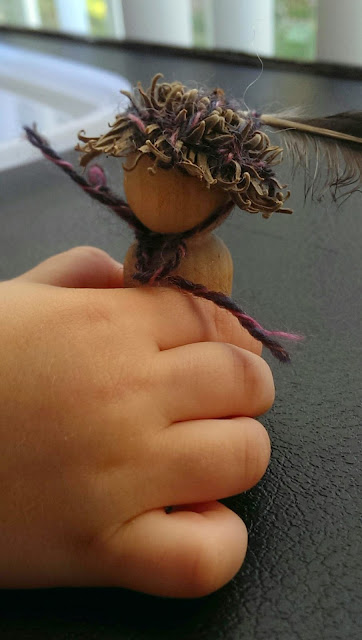 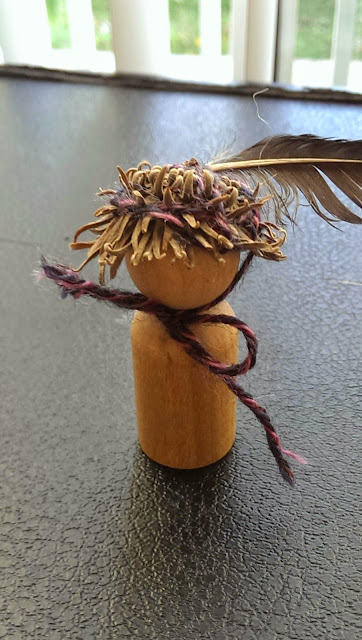 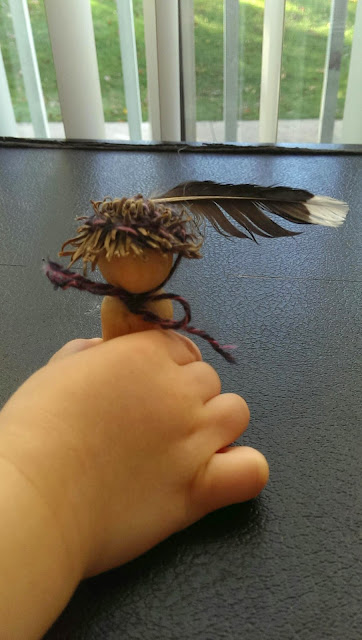 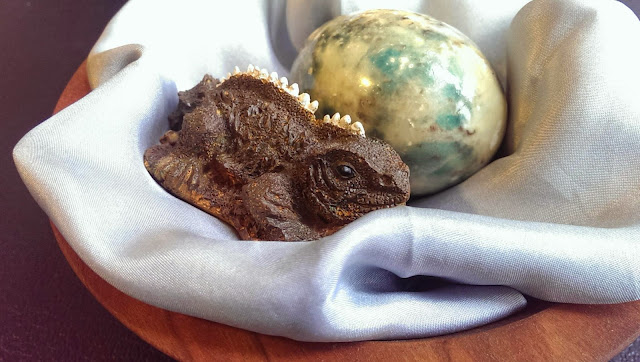 
I spent the entire summer making bee skeps. One might think from that that I had made many of them, but really I just took it very slowly. I think I pushed myself really hard this past spring and I just needed a project with no deadline. Although bees are associated with the feast of St. John on June 24th, I missed that "deadline" by a mile and decided not to rush. 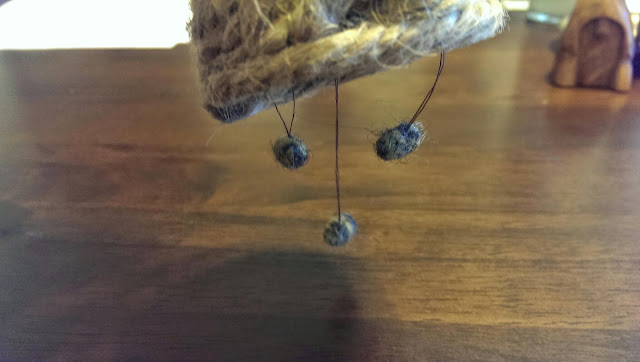 So, they showed up in our Michaelmas scene instead. 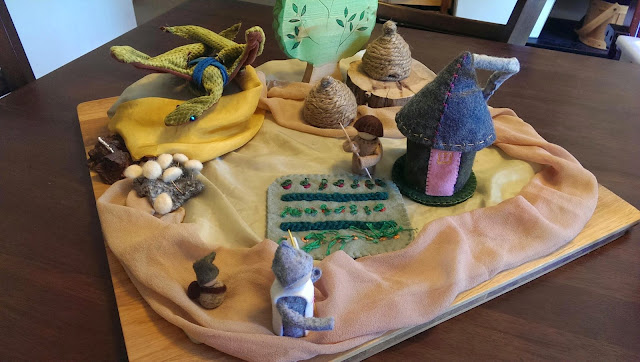 Our red cross knight makes his way through the village to check out the dragon. 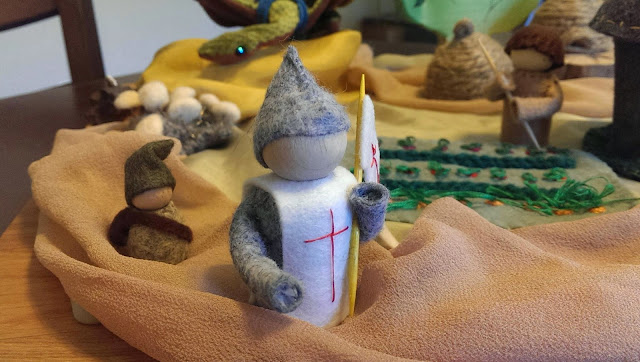 St. Michael(s) and St. George watch over the dining room. 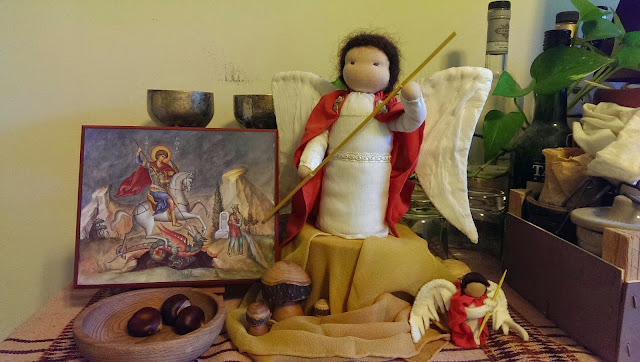 The battle is underway! 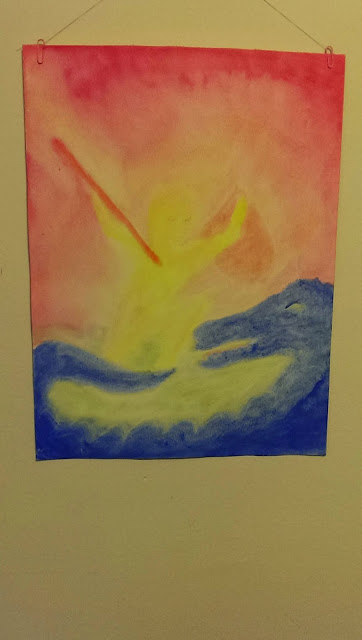 And our iron dyed banners show that St. Michael is the victor. Although our attempts at a simplified batik didn't work I was pleased and amazed at how they turned out. We will have an opportunity to continue the iron dyeing research with friends during our Michaelmas festival in the next few days. 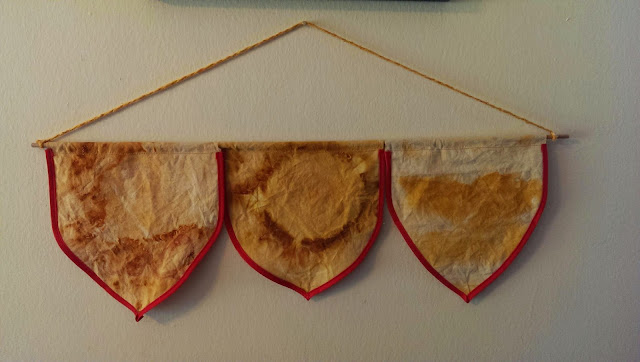 Wife, Mama, Maker.
Hello and welcome! I am Kimberly. Wife to Martin, Mama to one son, "B" and one daughter "M", and Maker of many things. You can read more about me on my About Me page! You can contact me at 1LordCircus@gmail.com Thanks for stopping by!

All items pictured, as well as all pictures themselves, are created and owned by me unless otherwise stated. I ask that you do not use any of them without my permission. You may however link to my blog. Thank you so much for your respect.

Please also read the most recent post at Lord Circus.